Out and about in Capadoccia 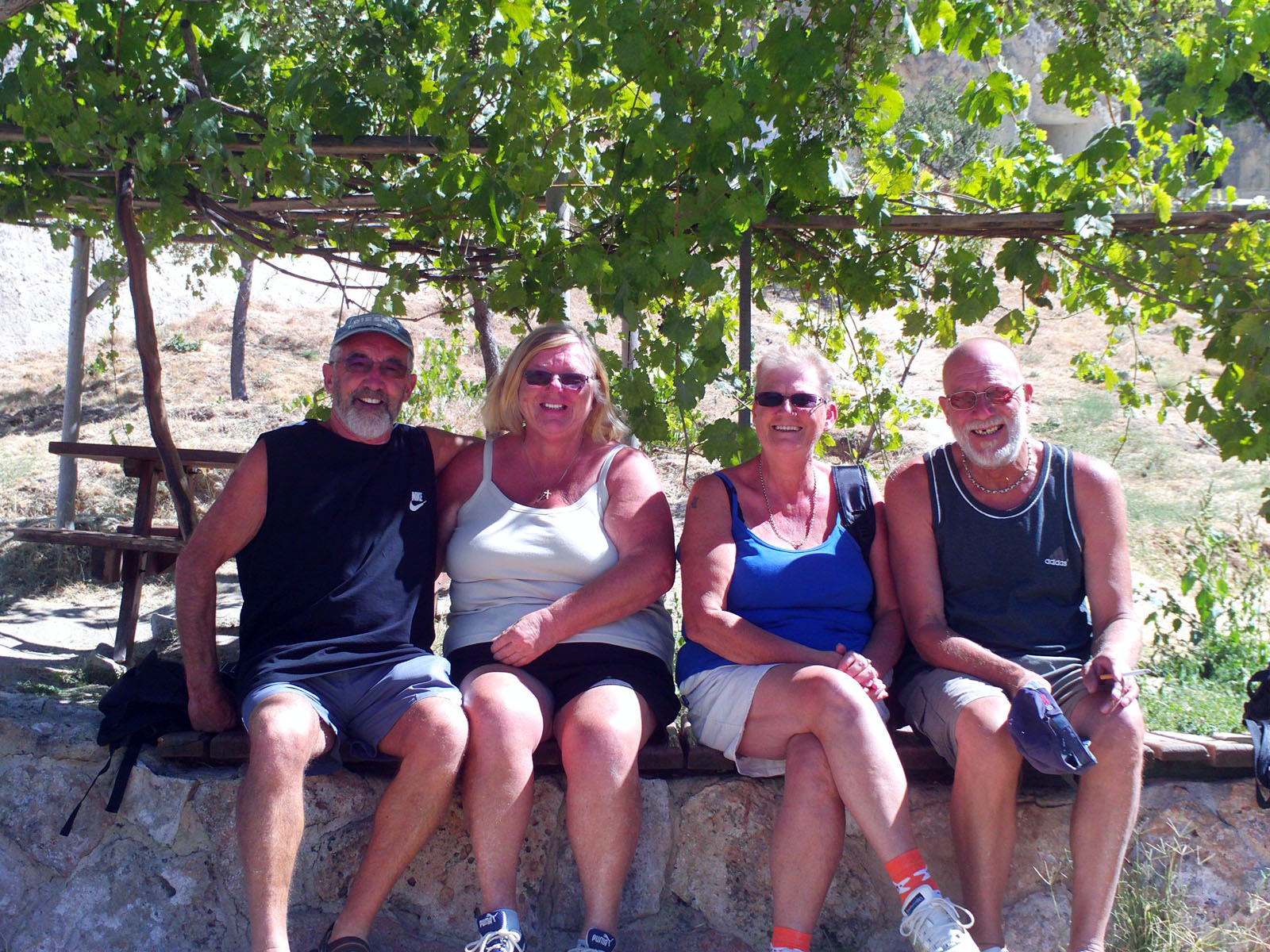 One day Margaret, Brendan, Ken and myself were talking and all said we fancied a trip to Capadoccia and organised it ourselves. As Margaret had been there before she said a good place to stay would be Goreme as she had stopped at Urghup. Margaret looked at places to stay on internet and we all decided we liked the look of a place called Elleysee pension in Goreme. They told it cost 50 Euros per room per night including breakfast so we booked it for 3 nights. We did not have to pay deposit but he took Margaret’s credit card number. Our friend at the bistro Armet booked us 4tickets one way to Goreme and told us the bus left Soke at 8 30pm.

We set off from Altinkum at 3.30pm and caught a dolmus to Soke. It took us about 1hr 10min to get to Soke bus station and cost us a few lire. When we arrived at Soke bus station, there was a very nice Turkish man that could speak English and he asked us where we were going. We told him and he took us to collect our tickets it cost us 50 lire each one way. The bus company was called Suha and we were told it was due to arrive Soke at 8.30pm so we sat down and waited.

The bus turned up at 8.30pm it said in big letters on front of bus that it was going Goreme in Nevshir. The nice Turkish man told bus driver and attendant where we were going and then wished us a pleasant journey. We set off the bus was very comfortable. It had televisions in back of seats but this was only in Turkish there, was plenty of leg room and the seats reclined.

On the way to our 12hr excursion we stopped to pick more people at different bus stations. On route we had about 5 good toilet stops at about 20min at each one. We also had free hot and cold drinks and snacks on the bus. Around about 7.30am next morning we arrived at Nevshir.

We got off the bus and were told we had to get on another to Goreme. We got on this one which then took us to Goreme it took about 20 mins. When we arrived at Goreme the bus dropped us off at bus station station in center of Goreme.

When we got of at the bus station we could see there were plenty of signs. We saw the one for the Elleysee so we followed it. It took us about 7mins at the most from the bus station. It was up a side road. When we arrived the manager met us. He said if he had known he would have picked us up from bus station. We checked in and he said our rooms would not be ready till later and we should go up on terrace for a free breakfast while we waited. The view from the terrace was fantastic you could see for miles and also see some of the chimneys. The breakfast was quite nice but basic. There wasn’t any meat as he said it was vegetarian there. There was plenty of tea and coffee which was free all day. When we had finished breakfast the manager came to talk to us about the area and the trips they did. He told us our rooms were ready.

We were in a cave room and Margateand Brendan were on next floor. There was a nice size double bed  one dressing table one small bedside cabinet and small wardrobe which only had 2 coat hangers in. The bathroom was quite nice a big shower wet room toilet and wash basin very little in shampoo and shower gel suggest you take your own. There was central heating in room but only put on when very cold we were told.

Once we unpacked we decided to go out for a walk. The weather was very nice but allot cooler than Altinkum. There were plenty of restaurants and shops but we did not see many bars where you could just have a drink.

We called in one of the places that did trips. They told us there were 3 different sorts a green trip this involved allot of walking and so did the blue one. We decided to do the red trip the next day as we wanted to see all the churches and also the fairy chimneys. He told us the trip would cost 50lire each and that included lunch. We were to leave at 9.20am so as we were only 5mins away we would meet them at there office.

We then went back to shower and change to go out for evening meal. All the restaurants were very quiet seemed everybody ate early and then went back for good nights sleep ready for walking next day. Prices for meals seemed very reasonable we had 3 course meal for 17 lire. They only have Effes there they do not have Tubourg which is about 4 or 5 lire most places.

Wednesday, we got up to have breakfast before we left. What a lovely view, there must have been at least 10 hot air balloons in the sky we were told you have to be picked up at 4.30am to go on these as it is something to do with air currant. When we finished breakfast we had walk across to wait for bus.

The mini bus arrived with the tour guide. We picked up about another 8 people up from various places. The tour guide spoke very good English. We then set off, the day was very good. We went to see the churches and the fairy chimneys and other places as well. We stopped off at a restaurant for lunch. We have been on dozens off excursions while on holiday all over the world but this lunch was the best we have ever had.

It was a long day we arrived back about 6.30 pm. We then went back to the Elleysee showered and then went out for an evening meal. We were tired from walking all day so we all had an early night.

Thursday, We had breakfast on the terrace watching the balloons again. We were told they are expensive to go on, we did not bother as we all didn’t like heights.

As tonight was our last night we thought we better go and book bus back to Altinkum. As we did not know what time it left Goreme. We went to the stand at the station that said Suha on it. He told us the bus picked up there at 8.30pm and it would have Kusadassi on it. We paid 50 lire each again and he gave us our tickets.

All day Thursday and Friday we did some exploring ourselves which is easy to do and also bought some souvenirs from the shops. We also found a fantastic coffee place that did all sorts of coffee. The manager told us he had got a room we could use to have shower and change if we wanted to.

Six o’clock Friday we all went back to have showers and change. We paid our bill which came to 370 lire per room for 3 nights and then walked down to bus station. There was a Turkish and English speaking man there who checked our tickets. The bus was late coming in it did not arrive until 8.50pm.The nice Turkish man made sure we got on the right bus and waved us off.

The bus was full. We had about 5 toilet stops for about 20mins and we also dropped people off and picked people up at bus stations. We arrived back Soke about 10 o’clock Saturday morning. The same man as waved us off from Soke was there. He asked us if we had a good time. He then told us to sit down for 5 mins. He then put us on a free bus back to Altinkum. What a fantastic time we had.

Our next adventure Istanbul …….